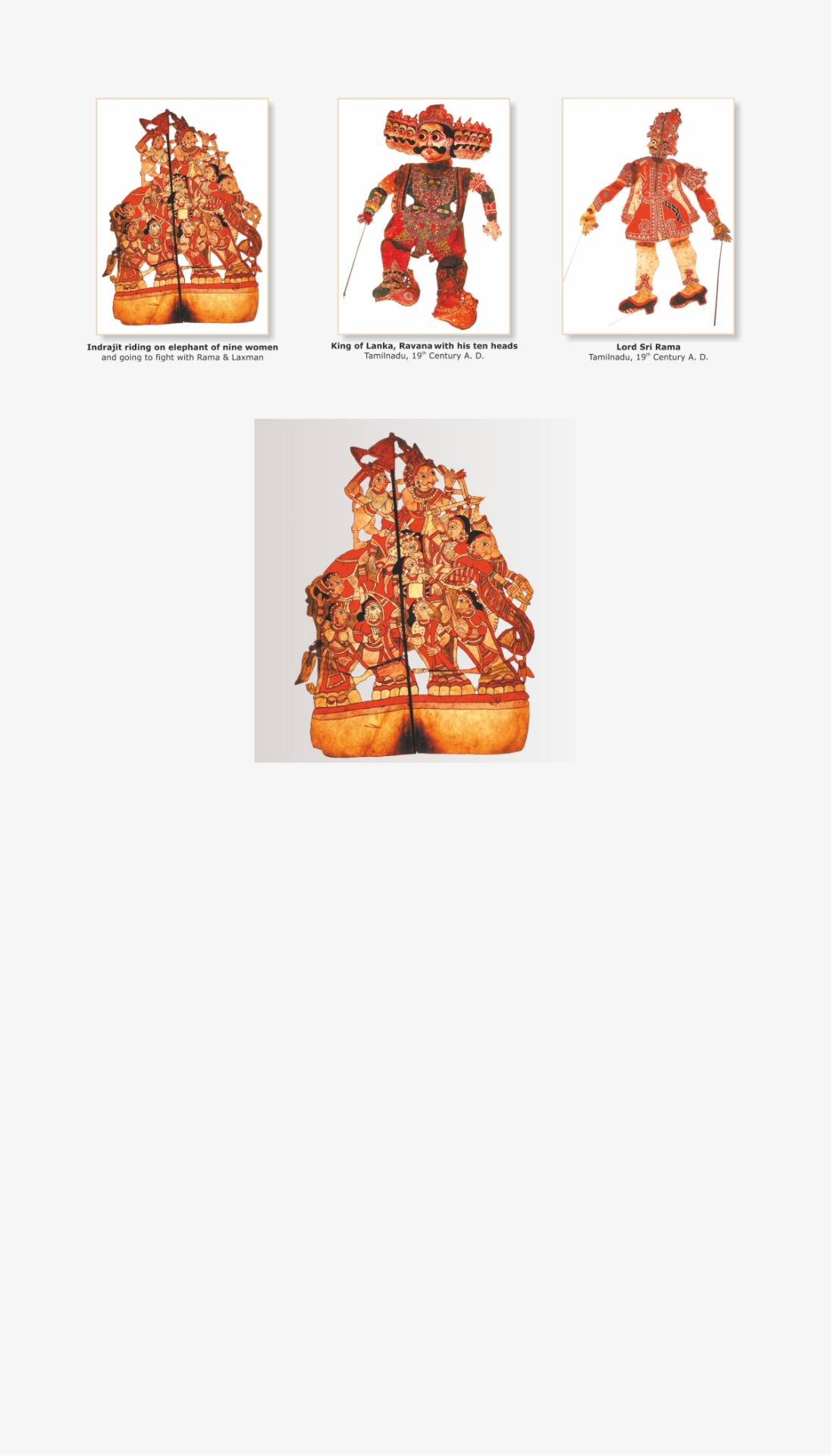 There are many types of surviving puppets to be found in India, such as String, Rod, Glove and Shadow puppets.

These types may also depend on the region where the art of puppetry was in vogue.

The Rajasthani Puppets are only about two feet high. They have very stylised good-sized wooden heads, with large eyes. The rest of the body is made of stuffed rags and cloth. Most of the figures have no legs but long trailing skirts or obese. Some puppets have legs like the stunt horse riders. The themes presented by these puppets are generally based on the heroic deeds of Prithvi Raj Chauhan, Raja Vikramaditya, Amarsingh Rathor and Dhola Maru.

In Orissa puppets of several types existed and were very popular. These string puppets vary in size. The one lot, having no legs are about one and half feet tall and have a skirt flowing down from the waist. The other type has legs. These Orissa puppets are better designed and have large head which are one-third of the full size made generally from some light wood or some times of paper. The large head and the limbs have more joints. The puppets are more elaborately clothed, with finery. There are a few animal puppets in Orissa such as the tiger, elephant, goat and the inevitable horse.

There are very interesting and unusual types of puppets in the South found in the Tanjour district, which were very popular till recent times. These are known as the “Bomalattam” and come from Tamil-speaking areas. The peculiarity of these puppets lies in that they are a mixture of string and rod puppets. They are about two and half feet to three feet in height and are fairly heavy, some times weighting as much as ten kilos. They are made from wood. Since they are so heavy, the strong strings of each puppet are attached to a cloth-covered iron ring. The museum has more than 40 string puppets in the collection.

The Leather shadow puppets were very popular in Andhra Pradesh and Karnataka. They are made of fine leather with fine cut-outs of important Pauranik figures. A bright light is thrown from the back side, so that the shadow of the figure or scene is obtained on the other side.

The breakdown of the old village society through the coming of the machine and the entry into the world of entertainment of the Cinema, have gradually ousted puppets and puppeteers, for the simple reason that the ordinary Hindi films for instance offers music, drama, melodrama, tragedy, comedy, dance and everything  one could expect from entertainment